Three young adults who are long-time members of PARC are proudly displaying the gold, silver and bronze medals that they won in early June competing in the Connecticut Special Olympics. And the winning glow has not yet left. Whenever Alicia Rostkowski, Maria Duval and Steven Robinson are asked about their winning experience, smiles fill their faces.

PARC is a family centered organization that has been committed to providing support services to people with developmental disabilities for 60 years. PARC promotes and protects the human rights of people with intellectual and developmental disabilities and actively supports their full inclusion and participation in the community by providing family centered support, direct services and advocacy. The program includes weekly activities and Camp Trumbull during the summer.

The three Plainville residents competed on the Mid-State Swimming Team at the games that were held at Southern Connecticut State University June 9-11. Parent Terry Rostkowski has been a pivotal volunteer for the Special Olympics for more than 20 years and is one of the local coordinators. She also serves on the PARC Board of Directors.

“Some of my responsibilities are recruitment, maintaining records for the athletes and volunteers, register the team for the games, initiate and organize fundraisers, and coordinate practices,” she said. However, she doesn’t regard it as “work,” instead a great opportunity to support and encourage the cause.

The entire team is comprised of 13 Special Olympics athletes, 12 volunteers, the head coach and two local co-coordinators. The volunteers also swim as special partners in relay races. Coach John Dubinski, a Plantsville resident, has been volunteering for nearly 25 years.

The two young women, Rostkowski and Duval, have been swimming on the team for well over 20 years. This year, Rostkowski competed in the 50-meter backstroke and won the silver medal. For the 50-meter freestyle, she received a bronze. The unified freestyle relay team won fourth place. Her previous achievements included swimming on the Connecticut team in 2010 when she and three others traveled to Nebraska to compete on the national level.

This year, Duval competed in the 25-meter and 50-meter freestyle races for which she scored gold medals in both. In the unified freestyle relay, her team received a silver medal.

This was Robinson’s first year swimming. However, “he killed it” with three golds, Terry Rostkowski said.

“This is more than a competition for the athletes. It is their weekend that they get to spend with their friends, beginning with opening ceremonies. The highlight of Friday night is thousands of athletes dancing on the turf of the stadium after the parade of athletes,” recalled Terry Rostkowski, Alicia’s mother.

The three days are filled with special activities and events, intended to recreate the Olympic experience. In a more informal setting, the participants can also play games and win prizes. In the Healthy Athlete suite, they can receive health screenings and learn about healthy living. There is always a dance held in a parking lot. “Everyone enjoys spending time with their friends but everyone’s favorite is getting that medal,” Terry Rostkowski said.

Reflecting on the whole experience, Fran Rose, who is Duval’s caregiver, referred to the three Plainville athletes as a “beautiful Special Olympics family.” Indeed, they are, Rostkowski noted.

For more information about PARC, visit www.parcdisabilitiesct.com or call 860-747-0316. 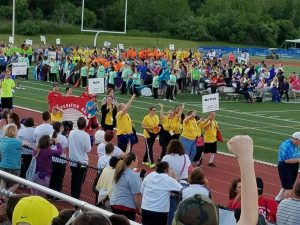 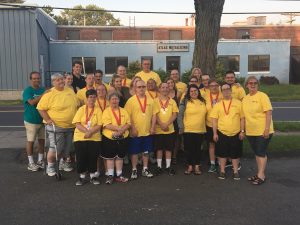 This site uses Akismet to reduce spam. Learn how your comment data is processed.

PARC promotes and protects the human rights of people with intellectual and developmental disabilities and actively supports their full inclusion and participation in the community throughout their lifetimes by providing family centered support, direct services and advocacy.

We are a family-centered organization that has been committed to providing support services to people with developmental disabilities in our community for over 50 years.

Our Program is designed to provide weekly evening social activities for our clients. The program incorporates individual activities as well as activities that require teamwork. The clients are able to participate in all of the programs regardless of their physical abilities.

There are no upcoming events at this time.